The UAV Challenge 2018 is over and we have had a spectacular week in Dalby. Eleven teams flew in the Medical Express Challenge. Their mission was to retrieve a blood sample from Outback Joe at his farm and in doing that they had to land within 10m of a visual target. Their aircraft had to fly at least 12 nautical miles from the Base of operations to Joe’s farm, and back (24 nautical miles in total, which is approximately 44.5km). The team to complete that mission (as per the rules) and score the most points would win $25,000. Teams had an option to complete the mission fully autonomously and show a complete hands off operation, and if they were the winning team, they would get an additional $25,000. Finally, teams had a second option to avoid Dynamic No Fly Zones in the DST Group Extension Autonomy Challenge. If the winning team also completed that, they would be awarded another $25,000. A maximum of $75,000 for one team was up for grabs!

But after three days of flying, the task proved just out of the reach of all eleven teams and unfortunately, there was no overall winner. No team successfully completed the Medical Express Challenge core mission, although two teams came very close.

The day began with just two teams left to attempt their mission flight. First up was High Flyers from Poland. They had elected to go to the back of the flight running order earlier in the week so they could sort out some issues with their aircraft. They told the judges and scrutineers this morning that they would not be capable of attempting the full mission and so instead would perform a simple mission that showed an autonomous take-off, a short flight and then an autonomous landing. They set up, put their aircraft out onto the field and it did exactly as they said it would – took off, flew a little and then landed – all fully autonomously. It was a shame that High Flyers did not manage to send their aircraft down the range, but it is wonderful to see that they knew exactly what they could and could not do and hence did not put the aircraft into a risky position.

JetStream’s aircraft returning to The Base for a landing (left) and some of the team just after a successful autonomous landing (right).

The final team to fly in the Medical Express event was JetStream, also from Poland. JetStream had been scheduled to fly earlier but had a technical issue and elected to fly last. Like the High Flyers before them, JetStream reported to the judges and scrutineers that they would not be attempting the full mission as their aircraft appeared to have a problem with its telemetry link and so only a flight of a few kilometers distance would be achievable. The team asked if the range marshals could place their Joe target out on the range a few kilometres from The Base and they would aim to perform an autonomous take-off, fly to the target, turn around and return, finishing off with an autonomous landing. The plan was agreed as it would not change any of the scoring of points  and the aircraft would not land at the target or report its location. The team’s set up was very professional, the take-off was fully autonomous, even if it was slightly wobbly! The aircraft headed down range to the (now close) target. It turned around, flew back to The Base and performed an autonomous landing. And that was it! A successful, very short modified mission. That was the final flight of the Medical Express event and the judges retreated to their judges’ caravan to thoroughly check through all of the scoring.

No team had successfully completed the main mission. All Medical Express fans will know why, but for those of you reading this that don’t, here is the list of criteria for a complete mission (from the Rules, Version 3):

The mission is deemed complete if all of the following criteria are achieved:

The top two teams on points were Monash UAS and Team Dhaksha. Both teams were superb. In the case of Monash UAS, even though they successfully landed within 10m of the Emergency-Target, they had an issue that meant that they had to command their aircraft to take-off from the farm and hence the take-off could not be deemed autonomous.  The aim of this mission is that Outback Joe would be able to initiate the take-off and he could not. In the case of Team Dhaksha, they did not land within 10m of the Emergency-Landing target. Their aircraft landed over 30m away, in the next paddock and on the other side of a fence. But both teams did achieve amazing mission flights and are congratulated on these fantastic achievements.

Outback Joe is still waiting for the results of his blood sample (left) and the briefing tent just prior to the scores being announced (right).

The final scores and ranking for the teams was as follows, noting that 55 teams entered the Medical Express Challenge 2018 and so the 11th ranked team, Forward Robotics, is ranked 11th from 55, i.e. a top 20% finisher! Well done to all the teams.

There was very little between the top two teams. Team Dhaksha had the higher flight segment score, but Monash UAS had a higher scoring Report and Team Interview. This was the tightest UAV Challenge result we have had for the adult competition since the first contest in 2007. 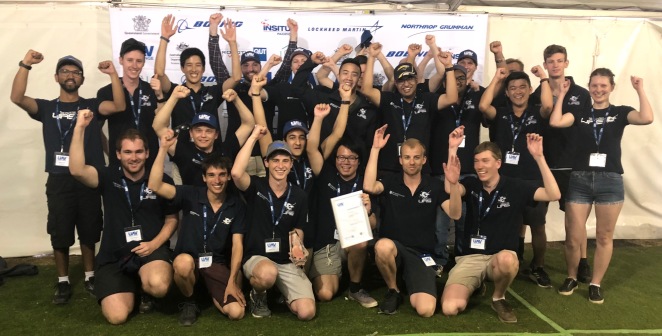 The Insitu Pacific Airmanship Award went to Griffin UAV for their professionalism, attitude and decision making abilities. Airmanship is a very important part of the UAV Challenge and the judges were impressed by a number of teams.

Finally, Canberra UAV were awarded an incentive award for the team performing best in the DST Group Extension Autonomy Challenge. Not only did their aircraft travel nearly the entire length of the course avoiding virtual dynamic obstacles, but Canberra UAV also shared all of their computer code with other teams. Their attitude to sharing everything and progressing the field of low-cost UAVs for civilian applications is commendable.

This year our Gold Sponsors were the Queensland Government, Boeing, Insitu Pacific, Northrop Grumman, Lockheed Martin and Defence Science and Technology Group, and our Bronze Sponsor was The Mathworks. The event was co-organised by Queensland University of Technology (The Australian Centre for Robotic Vision) and CSIRO’s Data61. We could not run these events without this generous support and also the volunteer support of many others who commit many hours of their time to the UAV Challenge. We thank you all.

The goal of the UAV Challenge is to demonstrate the utility of Unmanned Airborne Vehicles (UAVs) for civilian applications, particularly in those applications that will save the lives of people in the future. We do this by harnessing the ingenuity and passion of aero modellers, university students and high-school students around the world to develop novel and cost-effective solutions.

We will now review how everything went this year and consider how the UAV Challenge moves forward. Stay tuned for details of the next events.