This mission was run in 2016 and 2018 and was very nearly completed both years.

Technical goals of Medical Express (why we ran it)

Outback Joe is at his property in remote Queensland, Australia and has been feeling unwell. He has had a remote consultation with his doctor using video conferencing, and his doctor has requested some blood tests be done as soon as possible. Joe is well prepared, has a home sample taking kit, and has taken his blood sample. The challenge is now to get the blood sample to the lab. Joe’s property is very remote and to make matters worse, it has been cut off by floodwaters.

Teams were invited to attempt to retrieve a blood sample from the remote Outback Joe and return it to base where medical staff would be waiting to analyse it. Teams were encouraged to develop systems that could carry out the mission in a fully autonomous manner using Type 2 Autonomy. 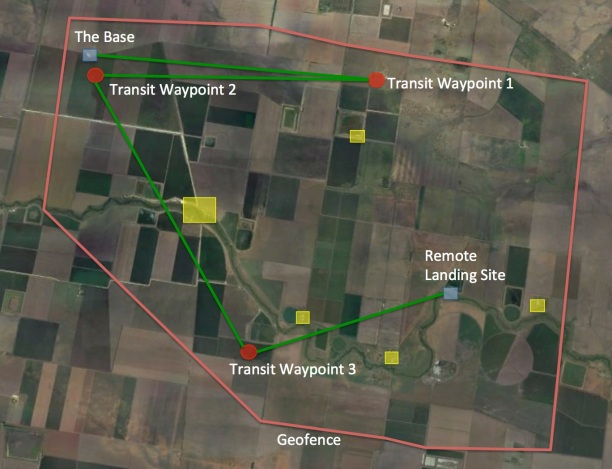 An example layout for a 2018 Medical Express Challenge mission. Note that this figure is an example only.

Differences between 2016  and 2018 competitions

You can see the archived Medical Express webpages here: 2016 and 2018.

Teams and Organsiers at the 2018 UAV Challenge Medical Express event

Teams and Organsiers at the 2016 UAV Challenge Medical Express event