Impact Monitors are now available for borrowing. Please register your team first and then email uavchallenge@gmail.com and ask to borrow an impact monitor.

The medical packages for the Airborne Delivery Challenge are X200-4 Impact Accelerometers manufactured by Gulf Coast Data Concepts. To learn the full details about the X200-4 Impact Accelerometer you can read it’s user manual at http://www.gcdataconcepts.com/GCDC_X200-4_User_Manual.pdf, but on this page we will explain how to use the impact monitor for the UAV Challenge.

The impact monitor electronics are the same as was used in 2016 and 2017, but we no longer use a custom 3D printed housing, but instead use the standard housing that is supplied with the impact monitor when it comes from the manufacturer.
1.1 The Impact Monitor

An impact monitor with the housing open

The impact monitor has 3 LEDs:

Starting a recording is as simple as pushing the recessed button. Use a probe such as a screwdriver to reach the button and push it and the top LEDs will flash briefly. After a few seconds the blue LED will begin to blink to show that the impact monitor is running. The top red LED will also flash whenever date is written.

The data is recorded as a comma separated variable (CSV) file. Below is an example of what the data looks like if it is opened using a text editor. Viewing the data like this you can see the raw measurements from the accelerometer but it’s not very practical to look at lots of data this way.

A better way to view the data is using a graph. Below we can see a simple test of the accelipen; shaking it, throwing and catching it and dropping it onto the floor.

When the impact monitor is plugged into a computer it will appear to the operating system as a USB drive with the name X200-???? where ???? is the last 4 digits of the device’s serial number.

The figure above shows the standard files on an impact monitor (as viewed in OSX). They are:

Your working folder should then look like in the figure below:

There are many different ways that the data can be graphed. To make it easier for competitors the UAV Challenge organisers have a provided a relatively simple mechanism for viewing the data which will also be used by the judges of the Airborne Delivery Challenge. Another tool that could be used is Microsoft Excel which can import csv files and graph the data, but the number of data points in an impact monitor data file makes using Excel for this a bit slow and cumbersome.

Python is a widely used programming language that emphasises easy to read code and can be used to perform complex tasks with only a few lines of code. The UAV Challenge orgainsers have developed a short python script to convert the raw accelrometers measurements for a data file to Gs and plot them on a graph. This script should have been loaded on the impact monitor when it was sent by the UAV Challenge organisers. The scripts can also be found at https://bitbucket.csiro.au/projects/UAVC/repos/accelipen/browse

The impact monitor python scripts use python 2.7, which is installed by default on OS X and common Linux distributions such as Ubuntu. Windows user will need to install python to be able to run the supplied script. A straight forward way of installing python and the packages that are used by the script is using Anaconda. Anaconda is a distribution of python that includes python itself and many software packages for processing data. The Anacaonda install instructions at https://docs.continuum.io/anaconda/install should help.

The show.py script is run from the command line. The exact way will vary between operating systems.

Shown below is an example displayed graph from running show.py. In the figure we can see two subplots, the upper plot showing the acceleration data from all 3 axes of the impact monitor and the lower plot showing the sum of the axes. In the bottom left of the window there are icons for tools to manipulate the graph. The zoom tool, highlighted with an arrow, allows you to zoom in on an area of interest. The yellow box in the upper subplot was dragged out using the zoom tool.

When the mouse button is released after clicking and dragging out a box using the zoom tool the graph is re- scaled so that the selected box fills the graph. The figure below shows the graph after zooming on the yellow box in the figure above. 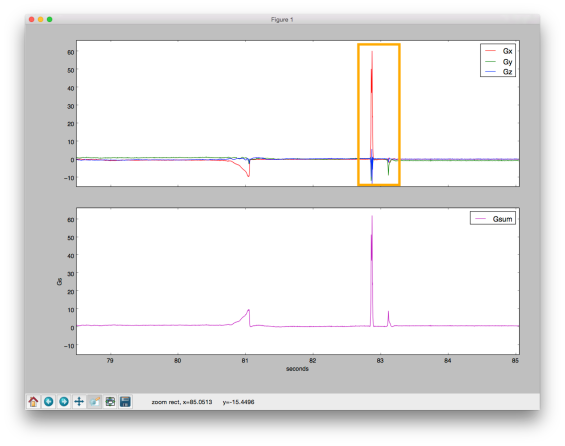 The figure below again shows the graph after zooming on the yellow box in the figure above. The other tool icons let you reset the graph, undo the actions you’ve done and move the plot around.

When the impact monitor was sent to you it will have already had a calibration file on it, so you shouldn’t normally need to do the calibration process yourself. In case the file is deleted or you think it’s wrong you can re-do the calibration.

To perform the calibration we need to have each axis of the accelerometer at its resting state. Gravity will mean there’s always a force acting on the impact monitor so we can’t easily calibrate all axis at the same time, but we can do them separately by changing the orientation.

To record a data file for calibration:

The figure below shows the data plotted by calibrate.py: 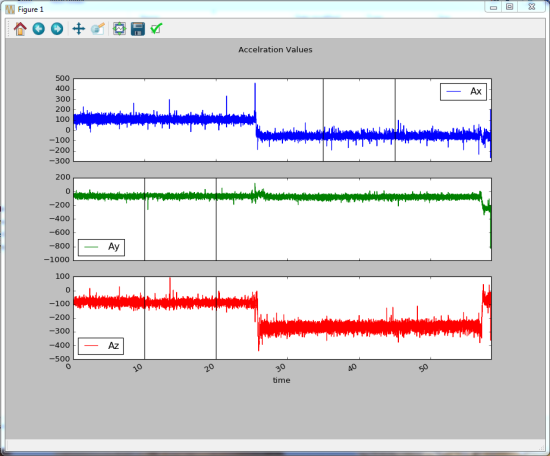 This figure shows running calibrate.py and the output it gives on the command prompt.

The impact monitor has a configuration file that controls how the data is recorded. The UAV Challenge organisers will have initially set the configuration file to the standard settings for the competition. It is possible to change the configuration but it is important to realise that changing the sample rate can change the magnitude of the recorded accelerations in some circumstances. The raw acceleration values are processed by a digital filter before they are recorded. This filter helps to reduce noise in the data. If the sample rate is configured to 800Hz or above the digital filter is disabled and very brief accelerations that would normally be filtered out may become visible. Very short impacts such as those directly onto a concrete floor may show a much higher acceleration when recording at 800Hz and above than when recording at the standard 200 Hz.

With this warning in mind, it can still be interesting to conduct tests at high sample rates. You may be able to see changes in acceleration during the impact that can help you understand what’s happening. Just remember to put the sample rate back to 200Hz when you are ready to test normally again.

If you do wish the change the configuration you should refer to the manufacturer’s manual http://www. gcdataconcepts.com/GCDC_X200-4_User_Manual.pdf and follow their recommendation to not use windows Notepad for editing the configuration file.